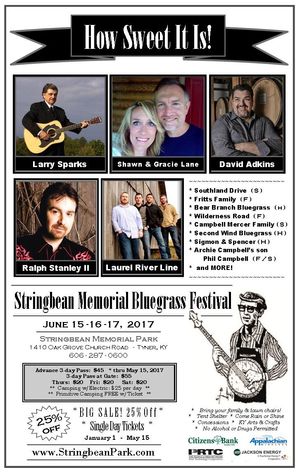 TYNER, KY (May 2, 2017) -- The stars scheduled to shine in the headlining spots of Stringbean Memorial Bluegrass Festival this Summer were announced today, as the Jackson County, Kentucky-based event kicks off its 21st annual festival on Thursday-Saturday, June 15-17, 2017, at Stringbean Memorial Park at 1410 Oak Grove Church Road in Tyner, KY.

The annual festival honors Jackson County native and beloved Grand Ole Opry star David ‘Stringbean’ Akemon.  His unique stage attire, traditional claw hammer banjo style, and entertaining stage banter endeared him to fans around the world. ’The Kentucky Wonder’ was best known for his musical comedic performances on the hallowed stage of the Grand Ole Opry beginning in the 1940’s and on the television series “Hee Haw” until his tragic death in 1973.

With a rich history and beautiful locale at Stringbean Memorial Park, the festival has hosted the biggest stars in Bluegrass including the legendary Ralph Stanley who headlined the inaugural event in 1996.  Other celebrated Bluegrass royalty brought in by festival founder Phillip Akemon include the Queen of Bluegrass Rhonda Vincent, 14-time Grammy winner Ricky Skaggs, Hall of Famers Del McCoury and Doyle Lawson, and 26-time IBMA Award winners Blue Highway.

Stringbean Park has launched a vibrant new website complete with an On-line Store for Tickets and Camping at www.StringbeanPark.com.

Early Bird Discounts on single-day tickets and a Big 3-Day Pass have been extended until May 15.

Regular ticket prices after May 15 will be $20 per day, or a Three-Day Pass for $55. Camping with electric is $25 per day, while primitive camping is Free with a festival ticket.

A Church Service will also be held for the first time at the festival on the morning of Sunday, June 18. Gospel music and a speaker will be featured, with everyone welcome and the time TBA.

A complete daily schedule and list of performers will be posted soon on the new website at www.StringbeanPark.com.