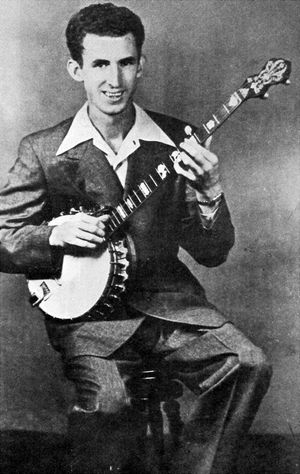 RENFRO VALLEY, KY (May 22, 2018) --  David 'Stringbean' Akemon, a legend in country music who rose from humble beginnings in Annville, was honored posthumously as the newest member of the Kentucky Music Hall of Fame on May 11, 2018.

Gathering first at the Kentucky Music Hall of Fame on May 10 for a private dinner and unveiling of Hall of Fame displays,  the new Inductees and their families watched as the spotlight shone brightly again on Stringbean Akemon, who rose to world-wide fame as a star of the Grand Ole Opry and Hee Haw television series.

The Induction Ceremony at Renfro Valley on May 11 featured performances by new Inductees, as well as Phillip Akemon,  his son Phillip Wayne, and grandson Jordan, who performed three of Stringbean Akemon's lighthearted songs, including "Run, Rabbit, Run."

"String would be tickled to death about his Hall of Fame Induction, and it was a great honor for me to receive his trophy for him," said his nephew Phillip Akemon.

David Akemon grew up in Annville, crafted his first banjo from a box and string, and traded two prized Bantam chickens for his first real banjo at the age of 12.

Stringbean also loved baseball, and met Bill Monroe while playing semi-pro baseball. Akemon became a member of Monroe's legendary Bluegrass Boys, and played with the Father of Bluegrass from 1942-45.  Earl Scruggs followed in Akemon's footsteps at banjo for Monroe when Stringbean left to get married and form a comedy duo.  Stringbean teamed with Grandpa Jones in 1946, and a lifelong friendship was born.  Akemon cut the first of his seven solo albums in 1962 called, "The Kentucky Wonder and His Five String Banjo."

Stringbean became a treasured regular performer on the Grand Ole Opry and Hee Haw until his tragic death in 1973.

He and wife Estelle loved the simple life, living in a cabin on a farm in Ridgetop, north of Nashville, with a color television set and a Cadillac as their only expensive luxuries.

Akemon loved fishing in the Rockcastle River, and hunting squirrel, quail, and rabbit.

Glistening under bright lights at the Kentucky Music Hall of Fame, Stringbean's prized Stevens double barrel shot gun is on display, along with his overalls, shirt, hat, and mint copies of his records.

For more information about Akemon and the Stringbean Memorial Bluegrass Festival and Park, please go to www.StringbeanPark.com.